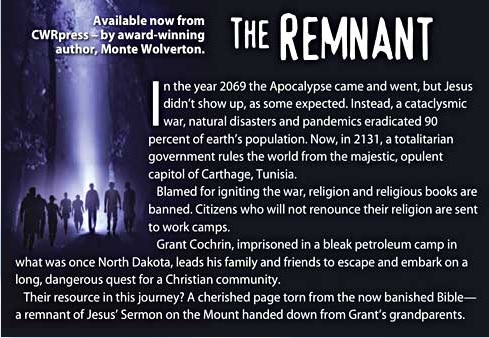 Monte Wolverton has a new futuristic/Christian apologetic book out: The Remnant. It's described by Monte as "a physical and spiritual expedition through a dystopian world." I hope Monte's writing style is better in the book.

Wolverton acknowledges that The Remnant fits in the Christian fiction genre, though he's not keen on pigeonholing it.

"Well, I'd rather not have this lumped in with the Christian fiction genre. I suppose it's technically Christian fiction, but I wanted it to reach a broader readership. Regular readers don't want to be slobbered on with lots of syrupy religious language. I personally find that off-putting. Christians would get more traction in the world if we made an effort to be—normal. As C.S. Lewis once said, "The world does not need more Christian literature. What it needs is more Christians writing good literature."' Greg Albrecht's CWR is, as expected, in donkey-deep with the publication, which doesn't infuse me with any great enthusiasm. As "an award winning author" you'd think Monte could find a more credible publisher. So no, I won't be ordering a copy personally, mainly because the plot line doesn't particularly appeal (dystopian futures? [Dystopia: an imagined place or state in which everything is unpleasant or bad, typically a totalitarian or environmentally degraded one.] Christianity meets Mad Max? Whatever happened to optimistic sci-fi?) though I have a good deal of genuine respect for Monte's non-religious work - how could anyone not appreciate his his brilliant caricatures and 'toons'.

More information at CWR and an interview. The bio statement underneath the interview reveals that Monte "is an ordained minister", but then leaves it hanging. Surely not GCI? Please, tell us it ain't so! C'mon Monte, spill the beans.

I contacted Monte a few months ago because he was having an art exhibit in Portland and lives just across the river. He never responded. If he is minister in a COG, I can understand that! lol

Maybe Monte would have gotten back to you if he knew your purpose in attending the exhibit stemmed from your interest in and support for his art work and book? I know that if I were doing one of our technology fairs, or trade shows, I'd probably want to keep everything on task. Just a thought. We know he's a good guy.

My interest BB was in his art the time of the inquiry. I would have had no interest in the book and only heard he had written one here, which is still of no interest. I have contacted several former friends/minister types in the area here who I have worked around years ago or even for and no responses. It's just interesting to me. I would have no interest in keeping anything off task. We were in school together and yes, he's a great guy.

The one I really would have enjoyed catching up with specifically took me from one area to work for him personally. I spent thousands of hours with him and family doing everything from taking care of the kids to washing the car and mowing the lawn. I went with him on regional visits and for better or mostly worse, he asked me about and we talked about whether I thought Dave Pack should come back into the ministry in the Chicago area. He had been terminated the year before and was in the area. Not that I was qualified at the time to speak about it, but I encouraged it because he asked. I also got fired the first time him in the coup of '74 about as naive as to what was going on as one could be. I was at his home for a "meeting" with deacons taking license plate numbers outside to send to HQ having no idea I was at a meeting of the rebels. LOL. Guilt by association. I got rehired two days later and was transferred to Ohio . In hind sight it would have been a good time to stay fired but I had a ways to go yet in this process.

It would have been nice to catch up.

Well, there are two components implied in what I suggested. One would be your interest (and I join you in that both you and I would have been very interested in Monte's art), and the second would be him being sure that that's what your motivation was in attending the event or seeing him. With no response, no communication, that second component or element was never reached. So, perhaps a missed opportunity.

If there is ever another event, or if Monte participates in Comicon and they have a Comicon in Portland, I'd just show up if I were you. I can't tell you the number of present and past Church of God types that just walked into my companies' booths at the various trade fairs over the years, smiling broadly and hand extended, and I always responded in kind, even happily doing lunch with one of the guys that I hadn't even particularly cared for back in the day. But, if one had ever reached out to me in advance, I hate to say it, but I probably would have failed to respond. That would have had more to do with what I had going on in my mind than what might have been going on in theirs.

It's a tough one, Dennis. The past teachings firebombed possible post-ACOG relationships in advance in so many ways, both overtly and subliminally.

On the subject of Wolvertonian art, had it not been for the Radio Church of God, I doubt that I would have ever been exposed to the cartoons of Basil Wolverton, and most certainly would never have met him. However, many of the underground cartoonists from the 1960s, such as Robert Crumb, or Ed "Big Daddy" Roth, claimed him as primary influences. The surrealism that was contemporary with the psychedelic movement of the '60s was a continuation of the surrealist tradition in painting, in which the obvious was either distorted or exaggerated. The ability to think in the abstract is not something which was generally encouraged or valued in the Armstrong movement. To a great extent, both Basil, and Monte were a breath of fresh air in that respect. It is also very unusual, and special, for a son to be able to duplicate his father's stature, and even to take it to the next level.

Wolverton art was and is unique for sure. From my Days collecting Mad Magazine, not knowing who did much of the art to being glued to the pics in "1975 in Prophecy" when 14 years old, and the Spokesman Club Manuel speaker cartoons, it is intriguing and well done punching buttons with exaggeration done well.

Dennis, the minister you're referring to used to meet frequently for lunch with two gentlemen I knew in Seattle. I believe they are now both deceased, but the last time I saw the one, he said GK will not discuss the church--at all. I don't know if he's retired, but he is on Facebook, as is his ex-wife. I wrote to him about Howard Clark because they were contemporaries, but he never answered.