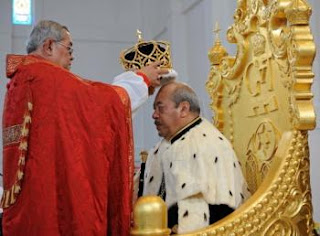 After watching the coronation of the king of Tonga, I've decided there is a branch of Christianity more deviant than Armstrongism, ancient or modern.

I'm a PC kind of guy, culturally sensitive to the reality of living in a multi-ethnic world where people of diverse backgrounds rub shoulders. But the bastardized display of European religion and Pacific heritage on display in Nuku'alofa was simply nauseating.

Sitting on a golden throne gifted by the People's Republic of China (!), the monarch received the rites of ascension from the Anglican archbishop of Polynesia, a middle aged man in drag.

According to Paul Johnson there are two ways Christendom sets forth to evangelize:

One is to evangelize the lowest and least privileged elements, capture their allegiance in huge numbers, and so work upward from the base... The second is to aim at the elite, or even at the individuals at the head of the elite, obtain recognition or adoption of the faith as a matter of state policy, and then work downwards, by authority, example or force (or all three).
Johnson, A History of Christianity, 410

Kings are crowned by men in dresses because their royal authority is thought to come from the fossilized Sky Father in Heaven. Resist Lord Muck and you're fighting God. Citizens therefore need to know their place and keep to it. The people of Tonga had to riot in the streets last year to make their call for democracy heard.

These days most of us have no illusions about the divine rights of Europe's chinless aristocracy. Kings, along with presidents and prime ministers, serve at the will of the people; which is why lobbiests invest in PR firms rather than prayers.

Whether Mitre-Man Jabez Bryce was conflicted by the anachronism isn't known, but the archbishop trotted out the full paraphernalia in a cringing rip-off of European privilege: antiquated language, silly hat, oil of anointing. The choir even sang Zadok the Priest.

The fisherfolk who accompanied Jesus would have laughed themselves silly.

The good news is that just hours before the festivities, George Tupou V (known to his buddies as G5) announced his intention to bring democratic reform to his tiny nation. By so doing he may have avoided the indignity bestowed not long ago on his Nepalese counterpart.

Armstrongism or Anglicanism? Hmm, tough choice.
Posted by Gavin at 12:54

WCG had a place in Tonga, too. Herman Hoeh, a lover of all things exotic, did not let this place escape his notice. One thing that fascinated him was how to keep the Days of Unleavened Bread when leaven didn't exist on the island. (It was a similar challenge to explaining to the French-speaking world how the spirit in man was what made the human mind different from the animal brain, when in French the same word is used for spirit and mind.) Also, Tonga is east of 180 longitude but west of the International Date Line. The WN once reported that the SDAs observe Sunday there, but the WCG recognized the authority of the committee that set the Date Line. Obviously it is a place where you might wonder about the universality of the Mosaic Law

George Tupou V was crowned as the 23rd king of Tonga on Friday in an elaborate Christian ceremony was the culmination of almost a week of festivities that included roast pig feasts, tribal rites and British-style pomp. The coronation was the first in Tonga since 1967 when George V's father, the late King Taufa'ahau Tupou IV, ascended to the throne.

Days before his coronation, George V announced political reforms that will strip from the monarch most of the near-absolute powers that his family has held for generations. He also said he had shed his stake in national businesses.

The moves reflect growing demands for more democratic government in the almost feudal kingdom, where the royal family is generally revered but has also been caught up in money-losing scandals in recent years.

The king rode in a black limousine to the capital's Centenary Church through streets covered by fine hand-woven mats and lined with crowds of his subjects. Buildings, lamp posts and trees were festooned with garlands, balloons, streamers and banners.

He sat on a golden throne in the church in front of 1,000 guests as Archbishop of Polynesia Jabez Bryce proclaimed he had been "anointed, blessed and consecrated" as king of the South Pacific nation. The archbishop called on the king to rule "wisely, justly and truly."

A large gold crown was placed on the king's head and a 300-member choir sang hymns. The king, in crisp white stockings and shining black shoes, left the church carrying a gold scepter and wrapped in a heavy black cloak despite the tropical heat, with two boys in uniform carrying its train.

A sumptuous royal luncheon followed along with traditional dancing, a fireworks display and an open-air royal charity concert. There were three separate coronation balls - one for guests listed as "VVIPs" (very, very important persons), one for "VIPs" and a third for regular guests.

The government on Thursday defended the more than $2.5 million price the impoverished nation will pay for the celebrations, saying the money spent by the thousands of tourists the event attracted will more than make up for it.

The costs include $418,000 for royal robes made in London, $37,000 for the newly minted scepter - similar to that of Britain's Queen Elizabeth II - and 1,000 new chairs embossed in gold lettering with the monogram GVT.

More than 5,000 people, from official guests to Tongans living overseas, flocked to the archipelago nation for the crowning.

Since his father died in 2006, George V has been trying to shed his reputation as a rich eccentric playboy with a taste for elaborate uniforms, colonial-era pith helmets and monocles.

The king officially became the 23rd head of Tonga's Tu'i Kanokupolu line of chiefs on Wednesday in a traditional Tongan ceremony. The line dates back to the 17th century.

The celebrations will continue next week, when George V tours the five outer island groups in the nation of 101,000 people to join feasting, singing and dancing in villages.

The Chinese gave him a gold throne?

Okay...what rare mineral is in Tonga?

Mostly, I've enjoyed your posts, but I don't get the relevance of this one to the topic of "Ambassador Watch".

Is your point that kings should not have a ceremony that includes religion? Or, is it that because you don't understand their "funny clothes" that you can't take them seriously? Maybe it's because there is residual mistrust of all things Catholic and they appear Catholic, so they must be bad.

There's a lot of pomp and ceremony at the coronation, and in all honesty, I think this world could use a little more ceremony. There's nothing inherently wrong with ceremonies.

Argue the point of outrageous spending, and I can understand that. But to say Anglicanism is worse than Armstrongism is just plain uninformed, especially when it is based solely on their "funny clothes".

All I could find on throne was that it was Made in China. So, what isn't?

To the tune of "Not Many Wise Men now are called."


Not many wise men now are called
Not many noble brethren
Not many mighty chosen ones
For you see your calling
Son's of God, you are called
Not because of Greatness.
Let those that Glory, boast in Christ, not in their own greatness.

(wow I remembered it!)

However the WCG leadership version in the past was....

Not many dumb men I hang around
Not many humble brethren
I like the mighty chosen ones
Just because of Greatness
Apostles of God, you are called
Not to hang with brethren
Let the Apostles of our God, boast in all the photos.

When I look at Anglican or Catholic Leadership decked out in their regalia, I do have to ask myself, what would Jesus wear?

The pomp and ceremony may have a place, but what place? What's the message. Shock and awe....control.

Give me a rock in the middle of a flowing river anyday as my church and a wind in the pines.

Does the world never tire of the pious priests in robes pretending to hold some kind of heavenly authority over "ordinary" people?

They have to urinate, defecate, shave and bathe just like any other man. They are subject to the same maladies that effect every other human. They are human.

It's simple really, they have the world duped. I kind of pity them when the world turns on 'em.

At first glance I thought that was old Herbert W sitting on the gold throne, Herbie would eat that up, more titles then Gerald and Dave ever thought of. ALL HAIL THE KING!!! or was that hell the king.

Because of my upbringing in the WCG, I too had a difficult time understanding why priests adorned themselves looking like kings. After all, aren't they supposed to not set themselves up as a king. Wasn't Jesus exactly the opposite? It wasn't until a priest explained to me the reasons behind and history of the vestments did I completely do a 180 on the subject. I won't explain it all here, but you can do a google search on the subject. Another blog gave a decent answer here http://gkupsidedown.blogspot.com/2008/02/why-wear-all-those-robes.html.

And, if you don't like the idea of wearing robes, remember that's exactly what Christians will be given at Christ's second coming- white robes. OK, maybe not as fancy as the purple or green polyester, but a robe nonetheless.

Does an immortal wear robes made of linen, wool or some other physical, earthly thing?

Think about this now, because this is important - what did the immortals wear before cotton, sheep etc. were created? Pixie dust, maybe? Or, did they just "poof" garments into existence out of nothing?

And, who told the gods that they were naked?

Rev 19:14 And the armies which were in heaven followed him upon white horses, clothed in fine linen, white and clean.

I guess they can, I wear denim and ride a GMC but I didn't pick 'em up in the heavenly shopping center.