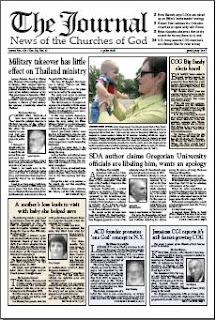 The latest issue of The Journal (June-July) is in the post, and there's a range of interesting material on offer from editor Dixon Cartwright.

* Samuele Bacchiocchi, an Adventist scholar well known in COG circles, is battling claims that he inflated his qualifications from the Pontifical Gregorian University in Rome. It seems incredible that his record could be questioned all these years after he was awarded a doctorate, and wrote openly about the process.

* On other matters pontifical, Bob Thiel gives unsolicited ecumenical advice to the Eastern Orthodox Church (no, really, would I make that up?) Doubtless the bearded Patriarchs of Moscow and Athens will be urgently meeting to carefully and prayerfully consider his cogent counsel.

* The remarkable Ian Boyne is once again strutting and preening about the accomplishments of his Jamaican CGI sub-sect. Thus saith Ian: "The Jamaican CGI is the largest and fastest-growing group derived from the Worldwide Church of God group in the English, Spanish, French and Dutch-speaking Caribbean and perhaps the fastest-growing Church of God (COG) group in the world." Ian's passionate advocacy is doubtless both admirable and unimpeachable, but it's not altogether clear whether those accomplishments include any internal system of checks and balances and elected offices in the cause of accountability. "The model we follow is what I have called “participatory hierarchy.”" - Say what?!

* One God Seminar speakers have again been chewing the unitarian fat, this time in Albany, NY.

* Brian Knowles has contributed a one-off column to put Bob Thiel right – and pass some remarks about an item I wrote on the blog a while ago.

The Journal website is www.thejournal.org and you don't need to be a subscriber to view the front and back pages in PDF format.
Posted by Gavin at 20:12

Ian Boyne may have the fastest growing COG in Jamaica, (which incidentally has a pre existing Sabbatarian population of nearly 14% thanks to the efforts of the Seventh Day Adventist Church, which allows the CGI there to have a "pre plowed field")...

BUT I..."THE LUSSENHEIDE" can lay claim to the fact that I am the FASTEST growing Church of God in ALL of Menifee California percentagewise!!...

Bill, it is the occupational hazard of the godly Christian:

Proverbs 11:25 The liberal soul shall be made fat: and he that watereth shall be watered also himself.

That's liberal in a good way.

All the ups and downs and rabbit trails of the questions regarding Dr. Samuele Bacchiochi's doctorate and his book From Sabbath to Sunday, starting with the original letter from the Pontifical Gregorian University denying Dr. Bacchiochi's credentials and ending with the public retraction and apology from the Gregorian can all be followed in the lengthy commentbox at XCG here:

The Greg really stuck their foot in it on this one. The only positive thing about this mess is that we know now that Dr. Bacchiochi had been misrepresenting the Catholic imprimatur on his book. But there's no truth in the rest of the 2004 allegations against him.

The headline and story by Dixon Cartwright gives one the impression that the controversy with his alma mater is still ongoing, whereas Dr. Bacchiochi said back in March that as far as he is concerned, the matter has been resolved, since the Gregorian issued a retraction and apology. Dixon Cartwright was kind of late coming to this story, which began in 2004 and ended in March this year.

One last comment about Dr. Bacchiocchi: though he is no longer battling claims that he inflated his credentialis, he IS battled advanced colon cancer, and I'm sure he would appreciate our prayers.

Of course, "fastest growing" is open to wide interpretation....

Rod over at COG&MM (Church of God and Mass Murder) wrote this:
Even in the heat of summer, we are planning for the coming Feast of Tabernacles--and the excitement is building!(Yep, real excited to be bleed) As we make preparations for the Fall Holy Days.... Last April, we (Rod, don't lie) were horrified by the mass killing of 32 people on the Virginia Tech campus—just the most recent in a series of violent attacks (besides the one in Wisconsin by one of our own members) that grow worse and worse with time. When all of us gather for the Feast of Tabernacles, we will be walking through a plan that portrays a very different world just ahead. It will be a world where “a man will be as a hiding place from the wind, and a cover from the tempest,” (Isaiah 32:2)(until a disgruntled member like Terry shows up at services) not a gunman willing to kill innocent human beings without a second thought.

How soon the false prophet and the sheep forget! How quick do the meds wear off...