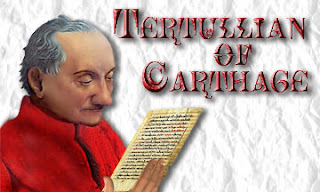 There are online quizzes out there for almost everything, but it'd have to be a slow day for anyone to dream up Which Church Father Are You? (there are no recognised Church Mothers apparently.)

I've got to admit, having had a stab at the quiz, that I'm hugely curious as to which of these eminent gentlemen longtime AW commentator Jared Olar would be best compared to. Jared is one of the most knowledgable persons on the ex-COG planet about the Church Fathers, and a tireless advocate for the virtues of the Western Catholic tradition. Athanasius perhaps, or even Augustine?

Another prominent figure who has devoted much time to a study of the topic is LCG's "unofficial nuncio to the Laodiceans", Bob Thiel. I'd have guessed he'd be a definite Tertullian, but seeing that's who I came out as, it's not very likely!

"You possess many gifts, but patience isn’t one of them. You’re tough on yourself — and on others. You’re independent, too, and you don’t like to be told what to do. You wish the Church would be a little tighter in discipline. As for the pagans, you’ve pretty much written them off. Sometimes you think the Church would be a better place if you were in charge."

What, little ol' liberal me? The only consolation is that Tertullian is the only church father I can think of who ended his career being regarded as a heretic. There's hope for us all!

On a somewhat related matter, former WCG member Kevin Edgecomb, now an Eastern Orthodox Christian, has his own blog. Kevin was well known for his forthright views on certain newsboards several years back, and I confess to an exchange of fire with him on several occasions (though I'm sure I never won any points decisions.) Kevin is also linking to the Church Fathers quiz, and if you scroll down his page I think you'll agree that the perspective he offers - at least for an ex-WCG member - is quite unique.
Posted by Gavin at 17:50

Hmm, well, oddly enough my quiz results actually make some kind of sense. I am St. Melito of Sardis:

"You have a great love of history and liturgy. You’re attached to the traditions of the ancients, yet you recognize that the old world — great as it was — is passing away. You are loyal to the customs of your family, though you do not hesitate to call family members to account for their sins."

Actually that's an uncanny description of me. I'm kind of freaked out now. How could they know??? It also seems fitting, given my WCG background, and given that my patron saint is St. Polycarp of Smyrna, that I would be identified with another great Quartodeciman Catholic saint.

Anyway, thanks for sharing this, Gavin. "Jared of Hippo" -- makes me laugh. It's always good to start the day with a smile and a laugh.

Oh, one more thing. Regarding the first question:

"When you hear the co-worker in the next cubicle utter heresy, you instinctively…"

b. hit him with a mallet and then question his masculinity.

Sounds rather like St. John Chrysostom or St. Jerome. In one of his homilies, St. John Chrysostom advised his flock to punch anyone in the face who claimed it is a sin to drink alcoholic beverages. Then, he said, when they arrested you, you should tell the judge that it's the guy you punched who should be arrested, for blaspheming God by speaking ill of something good that He created.

Neat quiz. Like Kevin, I wound up as Melito of Sardis.

The scary thing is, it actually fits my self-image pretty well ;-)

Thanks, Gavin. You'll have to remind me of which board and discussions they were, though. I'm unfortunately drawing a blank!

One odd thing, WCG-related, recently happened. I ordered a copy of an old book by G. Ernest Wright, The Old Testament Against Its Environment, and it turned out to be a library copy from the Big Sandy Ambassador campus. Weird! And then you pop up. Small world....

Probably just as well you don't remember ;-) ... The discussions were on one of Bill Ferguson's boards - JBAS or Ekklesia. Have emailed you off-blog.

I just took the quiz and got Melito of Sardis.

I took the quiz and it summoned three deacons who escorted me out of the building...

You said, "I took the quiz and it summoned three deacons who escorted me out of the building..."

A question about the three deacons who escorted Dennis out of the building - were they assistant Deacons or super Deacons?