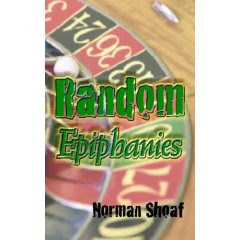 Norman Shoaf is a former WCG minister and spokesman. These days, while the WCG still runs some of his material on its website, Norm has made a reputation for himself as a journalist and editor, and a very good one at that judging from the various awards he's received, over at Antelope Valley Press.

. According to the PR:

Shoaf has written hundreds of articles on religion, ethics and moral behavior under his own byline, and ghosted articles for multiple high-ranking church officials.

As Opinion and Religion Editor and, later, City Editor at the Antelope Valley Press in northern Los Angeles County, California, Shoaf earned awards for editorial writing from the California Newspaper Publishers Association and for music reviewing from the Suburban Newspaper Association. His weekly "Portfolio" column won him recognition in 2003 as a Blue Ribbon Finalist for Columns, Commentary and Criticism from the CNPA Better Newspaper Contest. In 2005 he received the Walter Everett Fellowship from the American Press Institute.

It's doubtful that Norm will have any specifically WCG content, but if anyone has read Epiphanies and would like to offer an opinion (or even a review) for AW, drop me an email.
Posted by Gavin at 22:12

Email ThisBlogThis!Share to TwitterShare to FacebookShare to Pinterest
Labels: GCI

Epiphanies? That's FOUR whole syllables. Obviously not written for a COG audience then...

>>>Epiphanies? That's FOUR whole syllables. Obviously not written for a COG audience then<<<

So who are you?? LOL

In some ways, I believe that the anonymous poster to whom you responded might have a valid point!
I contribute to this blog regularly, but am going to use the anonymous button in this case, because I am embarrassed to say that during the years I was a COG member, I did not know what an epiphany was! When I was in high school, a friend of mine attended a church called "The Church of the Epiphany", and I had assumed that Epiphany was probably a city in Israel, perhaps one in which Jesus had taught during his ministry.

There are probably numerous of us who, in so many ways, didn't truly begin our educations until years after we left the COG's!

Yep, that's me...
I thought I knew quite a bit about my Bible, until I left the cogs and began reading other denominational treatments, such as Calvin's writings. I was an ignorant fool. Maybe I still am!

One of the things that is frustrating about the way people express themselves is the common habit of making a general comment with no specifics.

"I thought I knew quite a bit about my Bible, until I left the cogs and began reading other denominational treatments, such as Calvin's writings."

Perhaps a specific example comparing a COG teaching with a teaching from Calvin would help us to learn something we didn't know before.

General bashing is easy, and there is often some truth to it, since all humans in any area, group, church, etc. make mistakes, are wrong sometimes, and do stupid things.

>>One of the things that is frustrating about the way people express themselves is the common habit of making a general comment with no specifics.<<

Jim ,
There is only so much space to write in this little box, and longish comments sound too much like the old sermonettes before a sermon.
Not enough time to really dig deep into a subject.

I, as a mere woman, understood what Mario was saying without any further elucidation on his part.

Sounds like ol' Jimbo is anxious to defend the tenets of Armstrongism, and is frustrated because some just aren't opening up the door and giving him that opportunity.

Armstrongism is dead.It went west with Herbie in 1986 as I remember.

And yet,there are still those who insist on rigidly adhering to his tired,old and failed dogma.

Does anyone know if any critical,in-depth books have been written on Armstrongism? Plenty,possibly.They would make for good reading.

Ah well,may he Requiescat in Pace.

I was not asking for a doctrinal study, just enough specifics so a meaningful point is made.

There is plenty of room here for that.

We all know where most on this blog stand concerning the teachings of the Church of God. Most simply make the same general comment, "Armstongism is bad" over and over, in a thousand different ways.

Gavin, and a number here, bring something to think about. Many just like to bash.