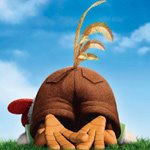 Why is it that COGism is so obsessed by the Middle East? I don't mean the Middle East of antiquity, the cradle of Judaism and Christianity; that would at least make some sense. To understand the Bible you need at least a little knowledge about the way societies operated back then, otherwise you just end up projecting modern assumptions onto ancient writings.

And of course, COGism does just that. Herbert Armstrong knew nothing about the culture of "Bible times." When someone came along who did know something (Charles Dorothy or Lester Grabbe) the old fossil quickly sidelined them.

No, you could line up all the scholarly articles WCG, UCG, LCG and the CG-tiddlers have published on the world of the Bible end-on-end and not reach the distance from the couch to the refrigerator. However, it's another matter entirely when you're talking "profussy."

COG magazines are saturated in what they call prophecy. Whole periodicals and websites are dedicated to wanton speculation parading as insider knowledge. The UCG isn't the only guilty party, but consider the not-so-subtley titled World News & Prophecy. Month after month of drivel as writers (and now even podcasters!) "cry wolf" again and again and again. If it's still around ten years from now you know they'll still be trotting out their one-trick pony.

Herb used to claim that one third of the Bible was prophecy. That's bunk. The only reason he thought so was that he knew next to nothing about the Bible (though he was pretty good at sewing out-of-context proof texts together.) What he did, at its simplest, was buy into discredited Adventist scenarios. Garbage in, garbage out.

Currently COG publications are in shriek-mode about the Middle East. One more article by Melvin Rhodes and I'll be shrieking too. Things are dire enough in that part of the world without a bunch of fringe fundamentalists racing around like Chicken Little. All that energy could surely be far better spent in doing something, well, Christian.
Posted by Gavin at 16:21

Can anyone think of ONE single prophecy made by any of the groups that actually came about?

The statement made by GTA was that "one FULL third of the Bible is prophecy and 90% of it has not been fulfilled". This is of course untrue. I think within orthodox Christianity, about a third of the Bible is seen as prophecy and 90% of it has been fullfilled. The gap between these two statements centers on all the fulfilled prophecy concerning the nation of Israel that was reconstituted by Armstrongites and applied to modern day Western European nations. This results in a much more marketable product with great benefit to those who would genuinely like to see other people "punished" and who revel in having secret and privileged knowledge. Claiming the imminent fullfillment of prophecy also permits the Armstrongite leadership to "spin up" their congregations with fear and excitement to give more money. It works nicely because what they are spinning up is the End of the Age and the implication is that money is probably soon to become worthless anyway.

It is a breathtaking marketing package. It works effectively. And as long as there are Armstrongites, they will claim that the End of Days is imminent. So, eventually, they are going to be right through happenstance. Where they will go wrong is all that nonsense about the Place of Safety being Petra.

PS: Jewish scholars believe that the people of the US and the UK are descended from Japheth. This is corroborated by the earliest writings of the Irish which were discounted, gratuitiously, by Herman Hoeh. And it is interesting that there is barely a mention of the descendants of Japheth in the Bible, although they are predicted in Genesis to be the most numerous people on earth. The reality doesn't provide the ego trip that British Israelism does, for sure.

One prophecy that has come true is that the Pope has gotten together with the German leadership.

I agree that the Pope getting together with the German leadership is probably a fulfillment of prophecy, and there are others as well. Probably the most obvious is the national decline of the United States in power, influence, and wealth compared with other nations in the world, which I think is setting us up for a fall.