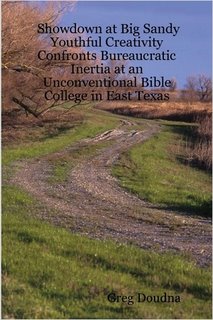 Did you know that:

*The opening of the Ambassador Auditorium was marked by the appearance of streakers?

*Herb Armstrong claimed to be related to US president Richard Nixon?

*GTA proposed cancelling the 1975 Feast of Tabernacles so the members could send in their second-tithe direct to Pasadena?

*AC Pasadena refused to recognise many of the courses taught at its Big Sandy sister campus?

Well, I didn't, and I'm indebted to Greg Doudna for plugging a number of gaps from the WCG's past. More specifically, the way the world looked from Big Sandy in the Seventies.

The WCG can probably be grateful that Greg wised up and found better things to do, for it's just plain scary to imagine what he would have got up to if he'd stayed and risen through the ranks. Just reading through his doctrinal papers from that time – positions he has long since moved beyond – indicate that this guy would have raised more than a little hell along the way.

The book in question is Showdown at Big Sandy, and the subtitle says it all: “Youthful Creativity Confronts Bureaucratic Inertia...” Doudna provides insight on a number of characters from the times: Dean of Students Ronald Kelly, for example, who is described as a hard working “company man”... one of many “yellow pencils” cut from the same mold... [who] did not try to disguise his lack of interest in things intellectual.

There are also anecdotes involving Herman Hoeh, Kenneth Herrmann, GTA, Charles Dorothy and other characters. The chapters on tithing and creationism are excellent, the treatment of healing and medicine is downright sobering, and the discussion of the old God Family doctrine is simply fascinating. (Let's all not tell Bob Thiel about that chapter, as he'd probably misunderstand it and gloat insufferably.)

But my favorite section of Showdown deals with the British Israel teachings. This is the best discussion of the subject I've seen yet, and it begins with Greg, in his youthful enthusiasm, floating a brand new theory which was later to be adopted by Willie Dankenbring, Norm Edwards, Ken Westby, Old Uncle Tom Cobbly and all. Only trouble being that Greg had already abandoned the idea and was amazed to find it being trotted out again long after leaving WCG behind. More details in part two of the review.

Greg can be restrained at times. He makes only passing reference to Armstrong's alcohol problems and steers clear of the incest allegations altogether. At other times his critique can be biting (you can almost see the tooth marks.) I read the 500 plus pages of Showdown over three days, and was left wanting more! There are some slower moments as, for example, he explains how he once tried to make all those numbers in Daniel add up to apocalyptic significance, but I guess this just goes to show that there's hope for even the most dogged date-setter.

If you're interested in the story of the church, or you still secretly wonder whether the church had some things right when it taught that the English-speaking countries were descended from Ancient Israel, this is one volume you really should add to your bookshelf. More details at www.scrollery.com.

Don't know about various other observations, but Herb probably WAS related, over x-number of generations, to Richard Nixon. Both of them were born into long-time Quaker families, and Quakers tended to marry within the faith. Lots of Quakers wound up in Iowa by the mid-to-late 19th century, many of them refugees from the slaveholding South (Quakers being against slavery and racial oppression). My maternal grandfather was a Quaker born in Iowa in 1880, and yes, we are blood relatives of Nixon (about seven or eight generations removed), and I suspect also of Herbert Armstrong. While I am fairly sure that Herbert was boasting and bragging when he made the Nixon-Armstrong connection, he was probably right on this one.

By the way, Greg Doudna likewise was born into a Quaker heritage!

This comment encompasses both this post and the previous one. Several
times I have encountered the idea that those who succumbed to Armstrongism chose to believe what they did. I do not accept that assertion. When someone tells you a lie and you believe it and you act on it, does it that make you fully responsible for what has happened? No it does not. I is
not as if you made a carefully considered free will decision to believe a lie. Instead the scenario is that you did not have the powers of analysis sufficient to refute the lie you were presented with.

To make it worse, Armstrongism functions like a Trojan Horse. One you let it into your mind and begin to believe some of it, it alters your powers of analysis and you quickly reach a tipping point where you become a convert to that belief system.

To say that someone chose to believe Armstrongism is a sophistic argument. It is like saying someone chose to be killed by sinking into quicksand. Afer all, you did walk to that spot. You did stand on that spot.
You did sand long enough to begin sinking. You did believe that you would only sink to your knees. Just because you can identify some elements of free will involved in the development of this drama, it does not mean that this victim of quicksand ever intended to die this way.

Believing in Armstrongism, or any falsehood, is a complex matter. It has much to do with all those things, both physical conditions and psychological conditions,
that diminish or modify our powers of analysis. As I scan over the material from Doudna's book, I am appalled that I could have ever been drawn in by this stuff when I was seventeen. It was my intent to do what God wanted me to do, not joint a cult. Just like Mr. Obermeit - he just wants to do
what God wants him to do. But his powers of analysis are impaired and he believes something about God that is false.

People who are Armstrongites are beyond "choosing" to believe what they do. For them it is a matter of personal conviction. Unfortunately, that conviction is ill founded. It is not nice to trick children.

Sorry to be so verbose but I need to emphasize that AC Big Sandy was different experiences for different people. I remember Ron Kelly dealing with a severe morale problem that seemed to afflict many on campus. He spoke befoe a staff meeting in the Field House, as I recall. This was roughly at the time that Doudna was a student. Kelly did not deal with any of the underlying issues. He essentially spoke in generic "Mom and Apple Pie" terminology. He said that he could not imagine a "happier" place than AC Big Sandy. For him, AC probably was a happy place. For many others it was not.

The feeling I had for AC Big Sandy is best conveyed by citing a certain genre of horror movie. This would be movies like The Wicker Man or Rosemary's Baby or maybe a few old Star Trek episodes or Eyes Wide Shut. The protagonist enters into a community of some sort and everybody seems inordinately happy. But something is amiss, lurking just at the edge of awareness. The smiling faces and smarmy politeness seem a little artificial and, perhaps, designed to be a facade for something that one cannot quite identify. The protagonist retires to bed and hears strange sounds at night. He explores and discovers people gathered under moonlight around a bonfire worshipping something noisome and engaging all kinds of evil practices. Yet the next morning, all the smiles are in place and nobody seems to acknowledge the hidden evil at night.

That best captures the atmosphere of AC Big Sandy in my experience. My experience was, of course, nothing like Greg Doudna's. I came to fear the night.

PS. I am also descended from countless Quakers. And I am distantly related to both Herbert and Loma.

And did I mention that neotherm gets a mention? Right there on page 16. ;-)

Didn't Mr. Nixon and Mr. Armstrong both trace their ancestry to the British monarchy? That would explain his claim.

Certainly HWA traced his lineage back to British royalty; not sure if Nixon did so or not. But as a very distant cousin of the disgraced late president, I would say that Nixon was probably related to the royal family, since our family is descended from one of the medieval English kings. But millions of Americans, and lots of Brits, at some point are blood related to the so-called royal family. We really are "in this together." Noah or not!